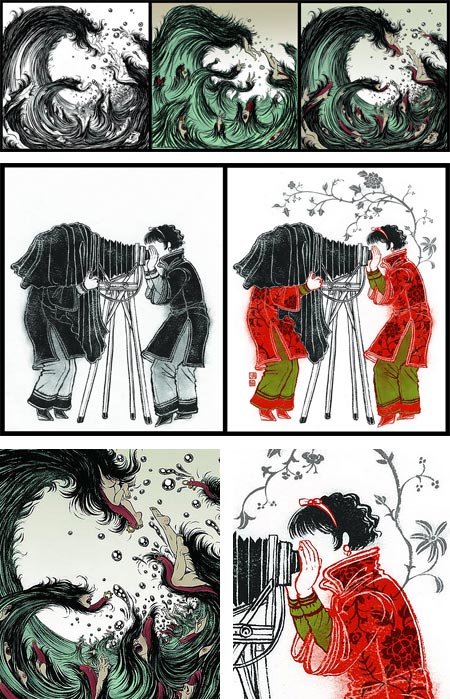 BibliOdyssey, that fount of the wonderful and bizarre, has posted a great series of illustrations by New York based illustrator Yuko Shimizu in two or three stages of progression.

These are usually a draft, final line and then final color version of the image. BibliOdyssey author peacay asked Shimizu for copies of her draft versions and put them together with the finals as sets.

The post is called Yuko’s Progressions. Click through to the Flicker postings, and then to the large size to see the details (images above, with my detail crops below).

For more see my 2007 post on Yuko Shimizu. Since then she has redesigned and expanded her web presence and is now blogging on Drawger and Lost at E Minor.

Dutch artist Anton Pieck was, among other things, a painter in oil and watercolor, a printmaker in etching, engraving, lithography and woodcarving; a comics artist and an illustrator of calendars, travel books, textbooks and classics like 1001 Arabian Nights (image above, bottom).

He was also a drawing teacher at Kennemer Lyceum in Bloemendaal until he retired in 1960. Pieck was born in 1895, when the “Golden Age” of illustration was in full force. One can only assume that he was exposed to the work of the great illustrators of the time, like Arthur Rackham, Edmund Dulac, Kay Neilsen, John Bauer, and in particular, Gustave Tenngren (also here and here).

Pieck’s more popular work has a wonderful visual charm, crafted from fine detail, deft control of color and atmospheric perspective, and fascinating compositions. His illustrations for 1001 Arabian Nights are marvels of book illustration in the classic Golden Age style, vibrant with adventure, moody and evocative in their rendering, and ripe with the sublime enticement of distant lands and exotic cultures.

When you were a child, and your parents first exposed you to that wondrous medium of information storage and dream exchange known as a “book”, it was an object that was only moderately intelligible.

As a pre-reading age child, the pictures may have had immediate meaning, but the other marks, which you would later come to know as letters and words, did not. They were simply marks or patterns on the page.

Gradually these became meaningful in ways too deep and astonishing to be fully appreciated; opening into other worlds and adding layers and layers of richness to this one.

What a great combination that was, though — fascinating images and mysterious marks, somehow related and holding the promise of meaning, yet withholding that meaning for now, leaving you to guess and wonder.

Italian artist, sculptor, designer and architect Luigi Serafini is best known for his Codex Searphinianus, an art book project that in many ways recreates that state of fascinating images juxtaposed with systematized markings that look like they have meaning, but withhold that meaning.

A “codex” is essentially just a book, in the folded and bound format familiar today. It was first brought into common use by the Romans, for whom it was an adjunct or replacement for the scroll as a form for storing written information. More specifically it refers to the interior pages of a book minus the cover, which was called a “case”. The term codex is now used more specifically to refer to hand-written manuscripts created prior to the advent of movable type. The most famous example is the codex of Leonardo da Vinci, formerly known as the Codex Hammer, renamed as the Codex Leicester by Bill Gates when he purchased it in 1994.

Created over a period from 1976 to 1978, Serafini’s Codex Seraphinianus is a 360 page book appears to be an encyclopedic description of an alternate world, illuminated with drawings of wonderfully strange creatures, objects and architecture.

All of it is accompanied by what is apparently a cryptic language, a systematic collection of marks that is presumed to be “asemic writing”, or writing without meaning, a false language (as opposed to an invented language that does have meaning, like Esperanto or “Klingon”). The writings are hand lettered in a decorative script and accompany the images as though in explanation of them.

The illustrations are imaginative, fanciful, bizarre, lovingly drawn and detailed, with an eye to classic drawings of real flora and fauna. (For a wonderful counterpoint, see some of the real thing, often tending to the bizarre, on BibliOdyssey.)

I don’t know of an online repository for the entire work, but there are pages available at various places on the web.

His influences seem to run to pioneering California Impressionists like Hanson Puthuff and to a lesser extent, Granville Redmond. This is particularly evident in the atmospheric qualities of his work; colors, though vibrant, are often softened in contrast, and their intensity muted in service of atmosphere.

Instead of painting brilliant sunlight reflecting from brightly lit subjects, Robert seems more concerned with light as a presence, filling the space between you and the subject.

His galleries are divided into Landscape, in which the atmospheric qualities are most apparent; Seascape, in which contrasts are more evident; and Figurative work, which is larger in size and presumably done in the studio rather than en plein air.

Don’t miss the Archives of additional work from each category.

Roberts is married to California painter Peggi Kroll-Roberts, who shares a fascination with light and shadow, often in the brilliant sunlight of beach scenes. Both artists conduct workshops, and the shared sections of their site include influences and recommended books. 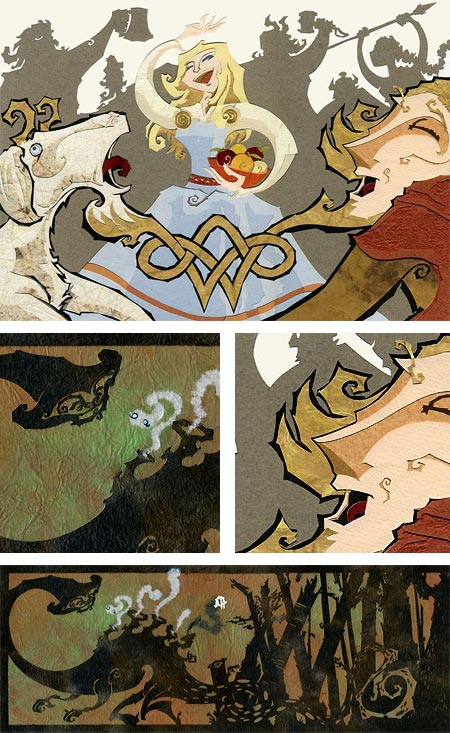 Illustrator Patrick Gannon creates his illustrations and artwork entirely out of cut paper (and wood, which often acts as the “canvas”).

He lives and work in Japan, where he found that his penchant for cut-paper art fit into a long cultural tradition of which he was previously unaware.

Gannon studied literature at Providence CoOllege in Rhode Island, and received an MFA in Illustration from Savannah College of Art and Design.

Gannon makes the shapes for his works out of handmade Japanese paper, the texture and color of which form the basis for his images. The cut edges and slight shadows give the shapes a rough, organic quality that Gannon uses to effect in both his general subject and children’s illustrations.

Gannon also does gallery pieces. In addition to the portfolios on his site, he maintains a blog called PaperCuts.

Known of his romantically suggestive story illustrations for magazines like McCalls, Good Housekeeping and Ladies Home Journal during their heyday in the 1940’s and 50’s, Coby Whitmore was a major figure in the wave of new style illustration that flowered at the time (see my post on Al Parker).

After studying at the Dayton Art Institute, Whitmore started his career as an apprentice in the studio of Haddon Sundblom (also here), afterward joining the famous Charles E. Cooper Studio. There he worked alongside the studio’s other major talents like Jon Whitcomb and Joe Bowler, painting his well-known magazine interiors and covers, including many for The Saturday Evening Post, as well as creating memorable advertising illustration.

Like the other notable illustrators who were defining a new style of illustration as photography pushed the more traditional realism of the Golden Age style out of fashion, Whitmore became concerned with the design of the page as an integral factor in the image.

In particular negative space, and the arrangement of figures and objects as design elements defining and defined by that space, became a dominant factor. Realistic rendering was de-emphasized and suggestions of rendering, combined with shapes filled with tone and texture, defined the images; with wonderfully designed passages contrasting the textured areas with the open spaces.

For an insightful take on Whitmore and his place in the transitions of illustration styles in the mid 20the Century, see Leif Peng’s article: The New School: Coby Whitmore, accompanied by his excellent Flickr set of Whitmore’s work (from which I borrowed the bottom two images above, large versions here and here). (Incidentally, Leif Peng has now added his considerable knowledge and resources to the team at Drawn!)

Later in his career, Whitmore became an instructor for the Famous Artists School, a correspondence art school founded by Albert Dorne and Norman Rockwell [Correction: please see this post’s comments]. He was inducted into the Society of Illustrators Hall of Fame in 1978.